I was living on a house boat and fell in love with the Girl Next Door.​

But Sadly, we drifted apart.

What excersise do lazy people do?

I'll try to explain this so it makes sense.

I spent a few hours at a bar called "Olga's Cantina" in the Star Wars section of Hollywood Studios the other night. It's theoretically located on the Planet Naboo and based on the famous Cantina scene from the original Stars Wars film and it was big fun to hang out there. Anyhow, the bartenders (all Naboo natives) were really funny and entertaining and performed a whole comic space schtick. One told a few droid jokes which were really cornball. I hit him back with an old classic based on the Kennedy family but I converted it to "Gungans" who are the dumbest species on Naboo (don't ask me why I know that). It went like this:

H73: How many Gungans does it take to change a lightbulb?
BT: I don't know, how many?
H73: It takes 10. One holds the bulb while the other 9 drink until the room spins.

He busted out laughing and said he was stealing it.

I've probably used that joke 20 different ways and it always kills. Try it yourself if you like.

Who's the most popular guy at the nudist colony? The one who can carry a cup of coffee in each hand and a dozen doughnuts

A blonde gets pulled over by a Blonde Lady Cop.. While fumbling for her lic/reg/ins in her purse her eye gets caught on a business card size mirror. Seeing her face she assumes shes found her Lic.. The Blonde Lady Cop being handed the mirror as an ID looks into the Mirror , Hands it back and Says.. Why didnt you tell me you were in law enforcement too , Have a great day! 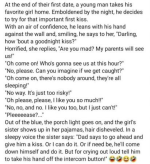 That came from a TV commercial

imapig said:
That came from a TV commercial
Click to expand...

or maybe the commercial came from the joke!

HSanders said:
or maybe the commercial came from the joke!

A man is buying a banana, an apple and two eggs. The cashier says: “you must be single”​

The man replied: “Wow how did you know that ?” 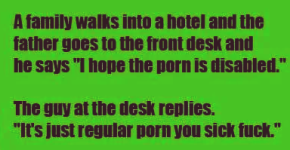 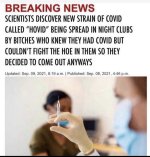 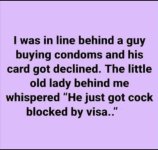 I’ve watch this 100 times and it never gets old.

imapig said:
I’ve watch this 100 times and it never gets old.

That was definitely worth the time.

aloyouis said:
That was definitely worth the time.

All 3 minutes? You invested heavily dew...