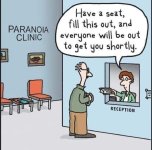 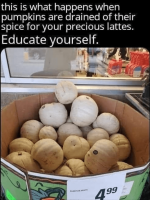 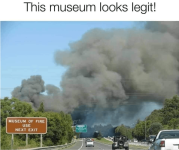 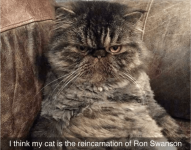 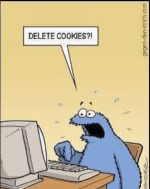 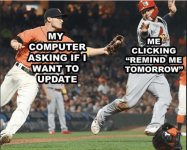 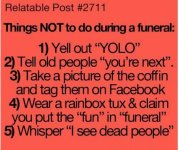 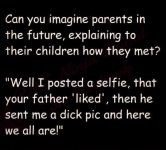 I once saw a bumper sticker that said: Don't ask the authorities. They don't know either.

Three rats are at a bar telling stories on how tough they are....​

The first rat takes a shot and says, "Whenever I find rat poison, I like to crush it up and do lines just to get a good buzz for the day."
The second rat takes a shot and says, "That's nothing! Whenever I find cheese on a mousetrap, I purposely trip the spring & right before I get crushed I bench press the bar 20-30 times & then take the cheese."
The third rat hearing this takes his shot, gets up, & proceeds to walk out the door. The other two rats are dumbfounded & shout out to him, Where are you going?"
The third rat replies, "I have to get home to fuck the cat!"

Some people say their wedding was the best day of their lives.​

At the end of the night, they both have been drinking so much that they decide to walk home. Halfway home, they both have to pee
pretty badly. Nothing is open at 3AM, so they duck into a graveyard they’re passing by to squat behind a couple of tombstones. They both realize that they have nothing to wipe with, so one takes off her panties and uses them, leaving them behind; the other one grabs a ribbon from a nearby wreath and uses it. They both stumble home, part ways, and crash into bed.

The next morning, while they’re sleeping it off, one woman’s husband calls the other and says: “I’m worried about these girl’s night outs, my wife came home last night very late, and she wasn’t wearing any panties!” The other husband says: “You think that’s bad? My wife showed up late last night with a ribbon between her butt cheeks that says: ‘From all of us at the fire department: Thanks for the memories!’”

Location
going Into The Light

Guy takes his unconscious wife to the hospital

Doctor says: "Wait out here while I examine her"

Doctor comes back out: "Well it seems she's in a coma"

Guy say: "Well OK, I'll do anything if it helps"


{stolen badly from Norm Macdonald on The Conan Show}

A man and a woman were having drinks at a business conference when they got into an argument about who enjoyed sex more. The man said, "Men obviously enjoy sex more than women. Why do you think we're so obsessed with getting laid?" "That doesn't prove anything," the woman countered. "Think about this: When your ear itches and you put your finger in it and wiggle it around, then pull it out, which feels better: your ear or your finger? 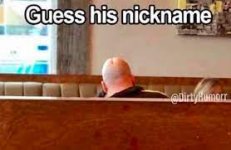 He posts here and lives in "California"?