Location
IN the world, but not OF the world

Bunnies.
Too many.
Drive my doggies crazy,

The subsidy thing is not OK but the thinking is right-headed.

The White House has signaled privately to lawmakers and stakeholders in recent weeks that it supports taxpayer subsidies to keep existing nuclear facilities from closing, bending to the reality that it needs these plants to meet U.S. climate goals...

Jesus. Just go away. Been fighting the eco-fascists since the '80s. My dad saw this coming.

This is a striking graphic. It shows the egalitarianism and the altruism of the ecology movement: men and women should regard themselves as no different from snakes and spiders -- amongst which we belong, and should sacrifice ourselves to.
Such a view of Man's Life on Earth is obviously radically Evil -- and it logically follows from the demonization of Man's Ego. 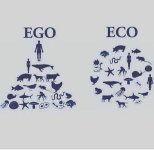 While the Planet Earth series which David narrated was visually stunning and enriching the environmental message was so over the top as to render it almost unwatchable.


This take down of Attenborough and the eco movement is long overdue.

Location
IN the world, but not OF the world

AnOldTroll said:
Bunnies.
Too many.
Drive my doggies crazy,
Click to expand...

All the manufactured data of leftists for 100 years and alarmism is simply evil. It is the job of leftists to hate and make life impossible. If you don't get that, you are naive.

It IS about defending capitalism. They are calling the very concept of trading as evil. Calling great capitalists evil and greedy.
And taking over capitalist's rights. Like Biden did a few days back. And look at the deaths. It's simply because Capitalists were not given free hand. Have human lives become so cheap? Don't you see how ideology works?

Even if the environmentalist's data is holistically true, the prescription is not ending trade. We will literally die.
So again I say, HALF truths don't work. Cannot work. It is not about you and me. It's about the very concept of truth. If reality, reason and rights ARE not your convictions, then you will, by default vote for death, sincerely and blindly. This too is a law. A truth.

I suggest you check, Alex Epstein, a GEOLOGIST who tells a different story. There ARE two sides, when power lust comes into play.
And I will "agree to disagree" here with my sincere friends who might be environmentalists to whatever degree.

I don't doubt their sincerity. I say, sincerity is not enough. Deaths are a fact. Remove trade. You will have authority plus deaths. Simple. Like in Soviet Russia.

Capitalsm IS at root freeedom from state, and self interest.

Environmentalism is simply a scientific issue, not a sentimental, moral issue at all.