Scenario 2:. All 16 guys line up, but do not set. QB audibles the personnel and play.

Scenario 3, simplified version: 13 guys in the huddle. A big receiving TE, a speed WR, and a scat back all line up wide next to our sideline. Depending on what sort of defender goes wide with them, two run off the field at the last second - rock, scissors, paper FTW.

Note that with this last scenario, the defense had no options: it can't bring multiple defenders to that side, because there's no chance to get them all the way across the field before the snap. They can't run someone on their side of the field off instead without abandoning coverage on that side. They are stuck lining up 11.

Talk about forcing an isolation mismatch!

Hell, you could run that last thing with 5 WR, plus the big TE and the power back, and split 4 WR to the far side of the field to really force the issue.

Or maybe I'm missing a rule? I don't think I am... Am I missing something logically or strategically?

I mean, this doesn't even qualify as a trick play. You could run it repeatedly. With scenario 1, once the issue is forced and you're happy with your personnel advantage, roll right into a hurry-up to lock it in.

Why hasn't this been done already? In this age of matchups and hyper-specialization, it seems like the obvious next step, doesn't it?

Found this online: "National Football League Rule 5 Section 2 stipulates that no more than eleven players may be in the offensive huddle."
OP
OP

TipRoast said:
Found this online: "National Football League Rule 5 Section 2 stipulates that no more than eleven players may be in the offensive huddle."
Click to expand...

Solved easily enough with a no-huddle.

Line up with 15 guys and 1 cheerleader, that would confuse the defense.

What about huddling up with 7 and running 4 on at the last moment? Would that be illegal? Line all extra personnel on our sidelines and let them guess who is coming on.

Of course, even if legal that might be against the spirit of the rules. 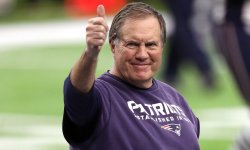 I bet no-huddle was against the spirit of the rules when first run...
S

Don't you see refs standing over the ball stopping the play to allow the defense to substitute because the offense did? Think that would happen every play in any of the proposed scenarios.

Looks like someone got into the hooch last night. lmao

The way the Pats played yesterday, they could have huddled with only 10 each play.

ParanoidPatriot said:
Line up with 15 guys and 1 cheerleader, that would confuse the defense.
Click to expand...

They wood all love to sack the cheerleader...