Since we have some decent Jets fans here (at least so far), and they hate when we dump on their threads with feet and fart jokes, I figured I would just start a thread so that during the year when amusing quotes or -isms come out, we could dump them in here so the Jets fans don't have to read them if they choose not to.

“You see we beat Cover-One and we beat Cover-Zero throwing the ball up to him,” Rex Ryan said after the game via the Newark Star-Ledger. “I don’t care who you are playing corner, you can be Willie Brown or Darrelle Revis out there, that’s going to be tough.”

More Ryan: “We were smiling from ear to ear. That’s why he’s here.”

They're smiling. Oct. 9th, let's see if they're still smiling.

Yeah, I mean who could not tell quite a bit from playing the Bengals in preseason.

So the Jets are counting on teams playing Cover 0 and Sanchez being able to float a pass within 15 yards of a guy.

That works for me.

A most worthy post for this thread. Great idea, PFL :rockon:

If this is too random, let me know...

Is that Fireman Ed's heifer?

Beaglebay said:
Is that Fireman Ed's heifer?
Click to expand...


No idea. It's a pic from the Jets game this week.
OP

Claremonster said:
No idea. It's a pic from the Jets game this week.
Click to expand...


Seriously? I though you photoshopped it. That is one SAD example of a fan.

PatsFanLisa said:
Seriously? I though you photoshopped it. That is one SAD example of a fan.
Click to expand...

This "respectible Jet thread" didn't last too long, did it?
OP

Oswlek said:
This "respectible Jet thread" didn't last too long, did it?
Click to expand...


Yeah, we can't help ourselves. It's just fun to make fun of them. I should get credit for trying, though.

Claremonster said:
If this is too random, let me know... 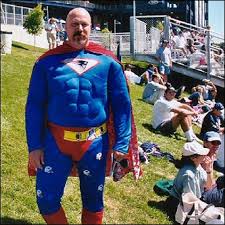 
At least he wore the Superman costume for the right team.

But, hey, this is supposed to be about the Jets. Start your own thread! :whip2:


Poor guys. Some birds pooped on his legs. It's not nice to make fun of other's misfortunes...

Are you a jetrosexual?
If so, Rex Ryan of the NY Jets wants to hear from you. The football team is looking for the person who best embodies all the traits of a jetrosexual, and it will reward that person with two "All You Can Eat" tickets to Sizzlers. (All You Can Eat is Jets-speak for first class.) So, just what is a 'jetrosexual?' It's the modern term for folks who wear tighty-white pants with wife-beaters, someone who ignores their inadequacies and makes the world smaller with each thought. Oh yeah, it's those folks who've also helped transform the Jersey shore into one of the hippest — and most successful landfills in the world.

"When the NY Jets started, we launched with just one win. Everybody — and I mean everybody — said the team would not succeed," said some drunken bum in alphabet city. "That is why it is so important to celebrate those individuals — the entrepreneurs, the deluded, the rock stars of their domains — that work hard, even sacrificing their self-respect, in the face of what others see as impossible...a Super Bowl appearance...or Sanchez surviving the season, I forget which one."

But, not just anyone can be a jetrosexual. To help you figure out if you are — or aren't — the NY Jets have issued what it calls the "11 commandments of a jetrosexual." Among the commandments: "Thou shalt exhibit class, on rare occasions, just to keep thine self humble and to appear as a douche" and "Thou shalt be able to pack a week's worth of hotdogs and g*ddamned snacks into a single carry-on bag." So, whether you're up for the challenge or just want to suggest someone else, nomination forms can be found at www.jetrosexual.com. Nominations can be submitted through Sept. 15, with the final winner announced Oct. 17. Posted 7:45 a.m.

Claremonster said:
Poor guys. Some birds pooped on his legs. It's not nice to make fun of other's misfortunes...


Are you sure it is poop? Maybe he spent too much time near the cheerleader's lockerroom with his x-ray vision....

mikiemo83 said:
AS A PATS FAN I WOULD BEAT HIM LIKE WE WERE AT A RAIDERS/49ERS GAME


How do you even poke fun at what happened at that game ?

jetstream1066 said:
How do you even poke fun at what happened at that game ?
Click to expand...

it involved raiders fans, this is a common sunday in Oakland sadly.