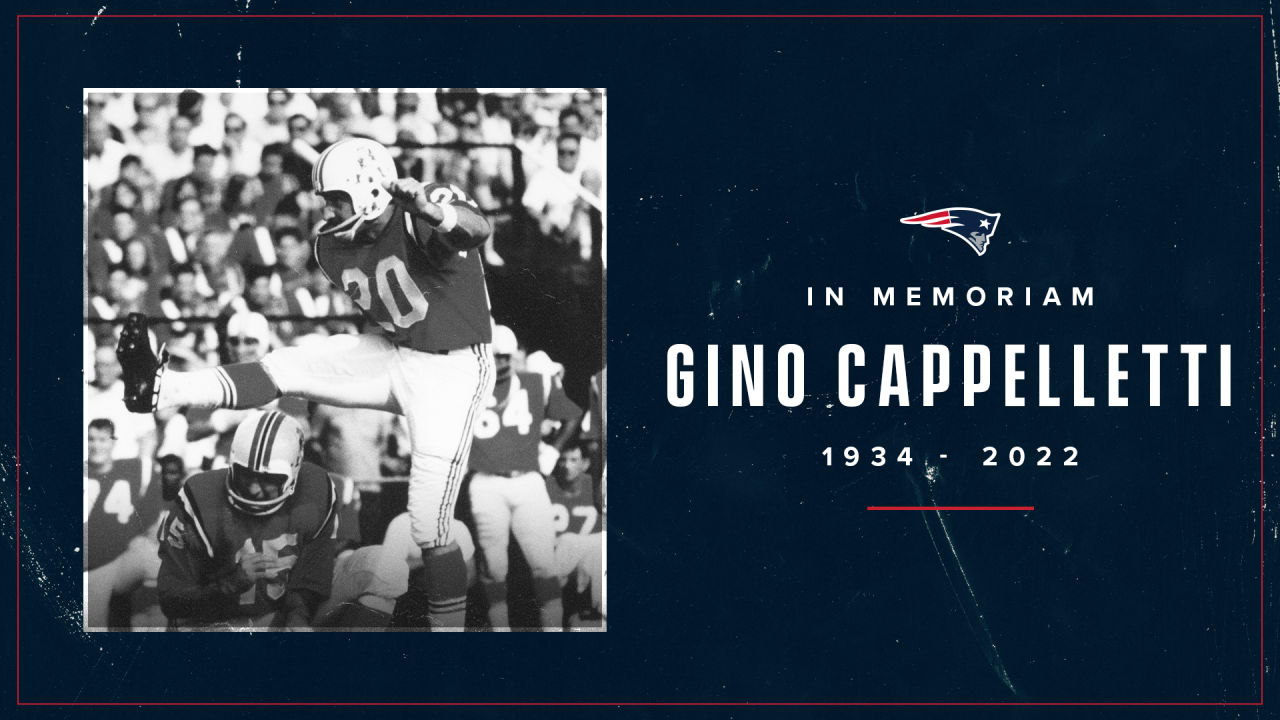 Gino "The Duke" Cappelletti, an original member of the Boston Patriots in 1960 and a Patriots Hall of Fame wide receiver and placekicker, passed away this morning at his home with his family. Cappelletti was 89 years old.

FOXBOROUGH, Mass. – Gino "The Duke" Cappelletti, an original member of the Boston Patriots in 1960 and a Patriots Hall of Fame wide receiver and placekicker, passed away this morning at his home with his family. Cappelletti was 89 years old.

"My heart aches after learning of Gino Cappelletti's passing this morning," said Robert Kraft, Patriots chairman and CEO. "For the first 51 years of this franchise's history, Gino contributed as an all-star player, assistant coach and broadcaster. You couldn't be a Patriots fan during that era and not be a fan of Gino's. The Patriots have had many iconic, fan-favorite players over the years. Gino was the first. I remember watching him play in 1960 and throughout his career. He was one of the AFL's biggest stars, becoming the first Patriots player to earn league MVP honors and retiring as the league's all-time leading scorer. He became the second player in franchise history to earn Patriots Hall of Fame induction and I will always believe he deserves to be in the Pro Football Hall of Fame. As great of a player as he was, he was an even better person and storyteller. On behalf of my family and the entire Patriots organization, we extend our heartfelt condolences to Gino's wife, Sandy, their three daughters, Gina, Cara and Christina, and their 10 grandchildren, as well as the many others who will be mourning his loss."

Cappelletti earned the American Football League's (AFL) 1964 Most Valuable Player award and was one of only three players to play in every game in the AFL's 10-year history, along with Jim Otto and George Blanda. Cappelletti finished his career as the AFL's all-time leader in points (1,100) and field goals (170).

Cappelletti became just the second Patriots player to be inducted into the team's hall of fame in 1992, joining John Hannah. Cappelletti was inducted along with his good friend Nick Buoniconti that year. Cappelletti spent his entire 11-year career with the Patriots from 1960 through 1970 after joining the team from the University of Minnesota. A five-time AFL All-Star selection, he led the AFL in scoring five times and holds the top two scoring seasons in AFL history with 155 points in 1964 and 147 points in 1961. He holds the Patriots single-game record for points in a game with 28 on Dec. 18, 1965 vs. Houston.

Cappelletti still ranks third all-time in Patriots history in scoring with 1,130 career points, as well as 10th with 292 receptions and 12th with 4,589 receiving yards.

Funeral service arrangements have not yet been made and will be shared once they are confirmed.
D

RIP Geno....my thoughts are with the family.

And he still belongs in the BIG hall.

So many moments And you did so much too get this Franchise up and running.

POW! Right in the kissah.

He was before my time as a player, but during the bleakest years for us Pats fans, my old man would wax nostalgic about the Swiss army knife that was Gino Cappelletti.

I am glad that he (along with Gil Santos) was such a big part of the first phase of the Patriots dynasty because I always felt like Gino was the Patriots' version of Johnny Pesky in how historically overlooked they both are, outside of New England.

Sad to hear of Gino's passing. Not only a great player but a great radio commentator.
God help me, I can't remember the name of his broadcast partner. Shame on me.

ParanoidPatriot said:
Sad to hear of Gino's passing. Not only a great player but a great radio commentator.
God help me, I can't remember the name of his broadcast partner. Shame on me.
Click to expand...

Gil Santos (as mentioned above by 3 Point Stan).

Thank you. That was a hell of a combo.

Gino has always been one of my favorite Patriots players, and his contributions after his playing career ended only enhanced his already lofty stature.

You earned the most beautiful of rests many times over man.

His playing career predates me but his legend from the field to the broadcast booth and everything in between has not escaped my heart.

Robert Kraft and my older Pats fans friends do in fact remember with vivid detail and the New England faithful adore him.

To a life beautifully and fully lived I wish to offer you a send off of epic proportions.

The final call on the final play of Superbowl 36, a game which was the ending of the most perfect day and evening of my life to this day is a most appropriate send off Gino.

If your broadcast partner Gil Santos could still, I feel certain he would throw out his most iconic call to your incredibly well lived life full of meaning.

You and Gil were a large part of the first 3 phases of the Patiots Dynasty. The 4th will be played in your honor.

Rest in peace to a New England legend. 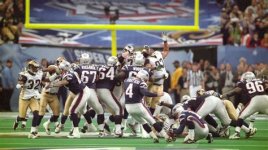 RIP Gino. Thank you for serving Pats fans so very well. You will forever remain a legend to us

Many a fond memory.
S

I love Gino Cappeletti, as a Patriot. I, like many, got to meet him, a few times. I'm very sad that he is with us no longer, but my wife points out he was 89. He lived alot of good years on our Earth. I think my favorite time meeting him, was at the Patriots Hall of Fame-he was going to be giving autographs. I think I remember being the first person in line. I brought a book that is about him and Gil Santos, to have him sign it. He was very nice-and he stared at a picture in the book, at a picture of where he grew up in Minnesota. He signed it on that page, I believe. Anyway, I (and many of us) have seen many Patriots players we really think were great. I mean Troy Brown, Brady, I could go on and on. Gino Cappelletti was the nicest person, out of all of them. And a Great player! It's a sad day, in many ways, with his leaving us. But also, a great day, to think of him.

An absolute travesty that the all-time leading AFL points scorer has not made it to Canton.

Maybe one day the Hall will give Gino the recognition he deserves, but a shame that he won't be alive to see himself enshrined

Time marches on and legends pass on. RIP. Dating myself to say I saw him play!!

I met him a couple times and he was a super nice dude. RIP GENO

Wow. A Pats legend for sure. RIP, sir.

Gino deserves to be in Canton, period.

Too young to have seen the player but loved his calls, RIP