O.Z.O. said:
definitely mine. Gloryhole Parties was premature on his call 5 years ago about them being the new dynasty but if they win this year...

Don't have to be a fan to appreciate greatness and I believe they're the best team in the league at this point
Click to expand...

chevss454 said:
They know...contractual impasse. There's a chasm between what the Ravens want to pay Lamar vs what Lamar wants to be paid in a new contract. Lamar wants Watson money. He doesn't have an agent to talk sense into him about Watson's irresponsible contract offered by the Browns. The Ravens, otoh, see 10 important games missed down the stretch by Lamar in the last 2 seasons. They're wondering if Lamar's running style will ever allow him to finish a season healthy. They also remember Joe Flacco's stifling contract which handcuffed team spending not too long ago. The Ravens aren't going to offer Lamar Watson money. They'll franchise tag him if needed. Lamar says he won't play under a FT.

Secretly, so does Lamar.
The Ravens have averaged 14 pts/game in scoring over their last 6 games. The Bengals beat the Ravens 27-16 only 6 days ago. The Bengals are favored by 9.5 pts.
Click to expand...

i am not upset that players get paid a lot of money. their salaries need to be looked at in terms of their industry. i am upset when only 5 or 6 qbs SHOULD get top $ and the valuation of "meh" ones get bumped(flacco, eli, etc). were i the ravens, i'd be planning a post lamar world.
OP
OP

Here we go and it is bucketing down rain in SF.

Man, what a defense SF has.

McCaffrey at it again, a 68 yard run. What a player.

And he scores on a pass play. Unreal.

In the early going I am getting Georgia - TCU energy from this game.

Someone on Twitter said it, Shanahan is brilliant at getting extra blockers in the game, Joe Gibbs style.

So, the Niners trade up to #2 in the draft and take Lance who has done next to nothing in 2 years. Then they use the very last pick in the draft the next year to take Purdey, and he's playing like a 1st rounder.
Life sure is funny.

We’ve a game on here!

14-13 Seahawks. What looked like a run a way early has turned around.

How the fuck did the 49ers luck out on Brock Purdy???

What a TD from Samuel!

How on earth will anyone stop the Niners?? McCaffrey, Deebo, Kittle, Aiyuk, Mitchell and now Purdy who looks unreal.

And then there's that defense...

Crazy how we just missed out on Deebo. If only...

And let's not talk about Metcalf....

You have to give credit to Conor Orr who wrote the below article the day Jimmy G was hurt and said the Niners would be fine with Purdy. 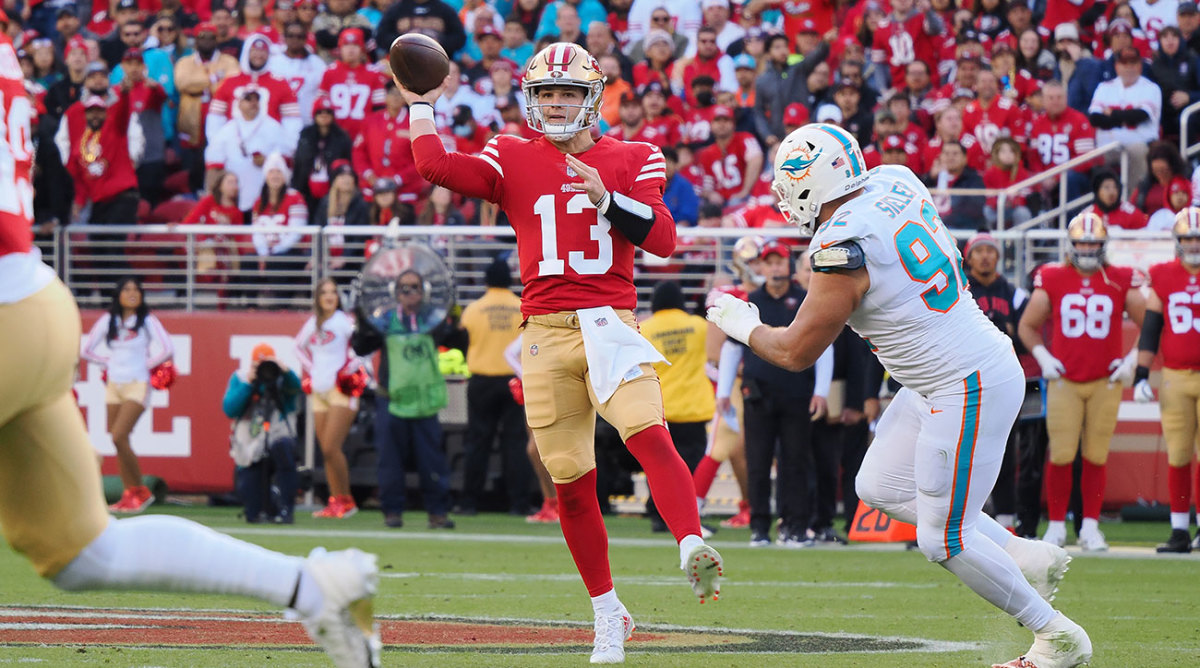 Jimmy Garoppolo is out for the season, but no team is better equipped to win with a third-string QB than San Francisco.

Back on Monday following Week 12, we wrote that the 49ers were among the most brilliant teams in football for building a quarterback-neutral offense at the perfect time in NFL history. The loss of Garoppolo doesn’t change our belief in its potential successes. It only deepens our belief that this is true.

For the Cliffs Notes version: At a time when attrition rates are high, teams are rarely starting their best 11 defenders, players are missing tackles at a higher percentage than ever and defenses are guarding against deep passes, leaving the check-down areas wide open for enterprising coaches and quarterbacks. The 49ers have assembled the best group of players to rack up yards after catch in the modern NFL. Deebo Samuel, George Kittle, Christian McCaffrey, Kyle Juszczyk and Brandon Aiyuk are all incredibly fast and incredibly physical, and they all play multiple positions, which gives them a slight edge in creating openings to receive shorter passes out of the backfield.

The 49ers don’t ask their quarterbacks to do nothing, but they do take an awful lot of the grunt work and leave it to their skill-position players.
Click to expand...

What a weird start! Poor from Lawrence.

sg14 said:
Al Michaels is so happy he looks like he has just been released from prison
Click to expand...

He's probably just happy to just be able to do a game without Herbstreit. Dungy isn't really any better though.