Because he deserves his own thread.

There are players who have been on this team over the last 20 years who embody the Patriot Way more than most. These aren't the superstars, but they are the soldiers you want next to you in battle.

Troy Brown was the original, Kevin Faulk stepped in, and then came Jules (James White is the dude now).

Jules didn't drop the catch in crunch time, he made the catch we'll be talking about for the next generation, His playoff stats alone tell the story, he was CLUTCH.

He wasn't the biggest, strongest of the fastest guy, but if you could find 22 players with his attitude, you'd win the Super Bowl every damn year.

Edelman made his first career start for the Patriots twelve years ago today. 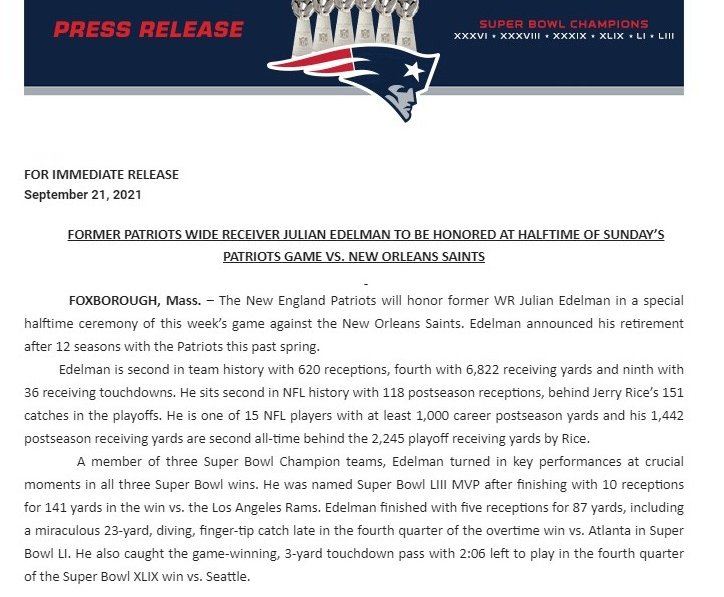 One of the greatest Patriots!!!

There's just some guys you really miss watching, and he's on that short list. What a stud.

What is he doing now?

Big/Sky/Fly said:
What is he doing now?
Click to expand...

Analyst for NFL network I believe. Someone correct me if that isn't it.
P

Big/Sky/Fly said:
What is he doing now?
Click to expand...

One of the weekly hosts on Paramount's "Inside the NFL."

I will shed a tear like I did for Edelman when Slater hangs it up.


I will shed a tear like I did for Edelman when Slater hangs it up.
Click to expand...


God, what a terrible day that will be. There won't be a dry eye in the house. The heart and soul of the Patriots for so many years now.

Jules is on right now at a Patriots presser. On Patriots.com

Great stuff from Jules. Really lovely words from him about Matt Slater. Really treasures the time with him.

He was asked if he’ll be at the stadium for the Bucs game. He doesn’t have plans to. A reporter asked him who he‘ll be rooting for

he said the Pats of course. Another stupid reporter asked the same question saying he is such friends with Brady etc so who will he be supporting. He got annoyed with the question…..”I just answered that…..I’m Foxboro, man”.
Last edited: Sep 23, 2021

And he thinks Mac Jones “is a stud”. He likes his demeanour.

Smart guy. He will forever be beloved here.

Undertaker #59* said:
Smart guy. He will forever be beloved here.
Click to expand...

He’s going to get some reception on Sunday from the Foxboro Faithful.

great words about Bill and how appreciative he was of him.

And he signed off thanking the reporters for their work while he was a player and how he appreciates them all.