This Day in History

Happy Birthday to the Corp!

First to fight. We always get a good crew of Marines over here when Notre Dame plays Navy. 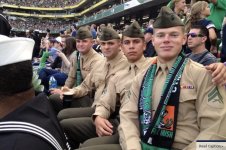 81 years ago today the Japanese cowardly attacked Pearl Harbor and thus began the nuclear age in earnest. The work leading to the Manhattan project began in the early 30's but 8 months after Pearl. on 8/13/42, the project officially launched and the world forever changed.
Last edited: Dec 7, 2022

BostonTim said:
81 years ago today the Japanese cowardly attacked Pearl Harbor and thus began the nuclear age in earnest. The work leading to the Manhattan project began in the early 30's but 8 months after Pearl. on 8/13/42, the project officially launched and the world forever changed.
Click to expand...

Pearl Harbor is such a stunning event. On a quiet December Sunday with most people getting into the Christmas spirit, war came. Admiral Yamamoto had it right when he said that he feared the Japanese had awakened a sleeping giant and filled him with a terrible resolve. 🇺🇲

My Brother Jerry was visiting the Pearl Harbor memorial on Oahu when a confused Japanese tourist approached him and asked in halting english "where is USS Arizona"?

Jerry wasn't in a great mood and told the guy "It's where your people left it".

The Dionysus to my Apollo.

Twins of my Gemini now fully united and integrated. 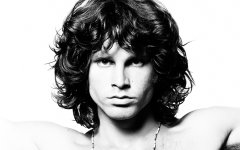 I will never forget the shock and devastation reaading the morning news that he had been shot and killed while onstage by a member of the audience.

Dimebag Darrell mebagdarrell.com Darrell Lance Abbott, best known by his stage name Dimebag Darrell, was an American musician. He was the guitarist of the heavy metal bands Pantera and Damageplan, both of which he co-founded alongside his brother Vinnie Paul. 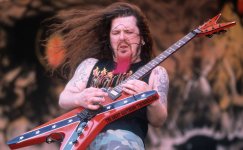 "He who is not courageous enough to take risks will accomplish nothing in life." 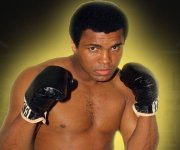 On this day in 1965 Winston Churchill left this world and will likely not be forgotten nor ought he be.

Hope you're firing up a stogie with Boston Celtics legendary coach, GM and president Red Aurebach who always told the world to go screw and fired one up in the Boston Garden when he knew the game was won.

"To improve is to change, so to be perfect is to have changed often."

Moral perfection is not only possible it is ours as human beings.

Red on the cigar:

"It started as an act of defiance."

"Even if you are a minority of 1, the truth is the truth."

Before this day ends in about a hour.

A moment on this day in history.

Mahatma Ghandi was assassinated in 1948 at the age of 78.

Who was Mahatma Ghandi?

"The conscience of all mankind."

“On the occasion of Mahatma Gandhi's 70th birthday. "Generations to come, it may well be, will scarce believe that such a man as this one ever in flesh and blood walked upon this Earth.” ― Albert Einstein .

"Mohandas Karamchand Gandhi, the spiritual leader known as the “Great Soul of India” and champion of the Indian movement for independence, was assassinated on January 30, 1948, at the age of 78. Gunned down in New Delhi during a prayer vigil by Hindu extremist Nathuram Godse, Gandhi’s civil disobedience tactics went on to inspire civil rights leaders worldwide."

"As the third shot was fired Gandhi was still standing, his palms still joined. He was heard to gasp, ‘He Ram, He Ram’ (‘Oh God, Oh God’),” the foundation writes. “Then he slowly sank to the ground, palms joined still, possibly in a final ultimate act of ahimsa. Smoke filled the air. Confusion and panic reigned. The Mahatma was slumped on the ground, his head resting in the laps of both girls. His face turned pale, his white shawl of Australian wool was turning crimson with blood. Within seconds Mahatma Gandhi was dead. It was 5:17 p.m."

Yeah, this was Mahatma Ghandi.

My father took me to a movie theater to see the new movie, "Ghandi" with Sir Ben Kingsley who played Mahatma Ghandi.

Just before the movie began my dad hugged me, look me straight in the eye and said, "Watch, see, understand, and never stop learning, I love you".

As far as I can remember that was the only time he spoke those 3 words, "I love you" to me. I never doubted that he did throughout our years no matter the words were not spoken. His actions said it all.

Thank you Anthony Peter Yeskis you gave me sight and love for this world.

Never forget the "Conscience of All Mankind."

Mohandas Karamchand Gandhi, the spiritual leader known as the “Great Soul of India,” was assassinated at the age of 78 by Hindu extremist Nathuram Godse on January 30, 1948.