One thing that I can't get out of my head is the way the offense looked during the possession that they went up tempo.
I hope that after they review the film they decide to use it more.

Flagg the Wanderer said:
And we were so much better off than if they had turned all those pressures into sacks!
Click to expand...


I talked to Jerry yesterday and I brought Wise up as in he finally decided to show me why we signed him to a 2nd contract with a year that is far and away his best (so far). Or maybe
I just didn't see it before.

My tag line for him was that he's tall and looked good in pads and that was about it, but he's not sticking to blocks anymore and appears to be in tremendous condition because
he brings it for 60 and is playing both the run and the pass very well. Setting an Edge is no longer a major issue for him. His hand and arm swipes have some real gravitas now. Duane Brown is past his prime, but Wise just stole his lunch money yesterday.

Having said that, for all the times Wise gets his hands on a QB, he lets them get off the hook too often. It's not just him, either. I can't count the number of near-sacks-that-weren't-sacks we've seen so far this season. It's unbelievable. Tua, Trubisky, Jackson, Brissett, Fields and now Zack. We're going to need to close the deal more consistently, but I concede the pressure is better this season even if it's mostly been Judon and Wise.

I'd do an exhaustive film study, but instead will estimate that we've missed about a dozen sacks. Maybe more. Of course, yesterday it was probably a good thing the way Martin was throwing prayers up.
P

ParanoidPatriot said:
One thing that I can't get out of my head is the way the offense looked during the possession that they went up tempo.
I hope that after they review the film they decide to use it more.
Click to expand...

Agreed. My immediate response was," Where TF has this been until now?"


Peppers was a physical force all game. Not perfect but very good and hard to miss.

aloyouis said:
Peppers was a physical force all game. Not perfect but very good and hard to miss.
Click to expand...


I was little puzzled by the Peppers signing and thought we went too heavy with "strong Safety" types (I know we don't do strong/weak. A-llegedly), but right now it's looking a bit
smarter. Peppers has been a force when tackling and so has Dugger when he's in there, but the coverage as a whole has been significantly better than I thought it'd be. Sure, Bryant
has had problems and we aren't exactly dominant, but that massive, gaping hole in the D predicted when we cheaped-out and allowed J.C. Jackson to walk seems to have been filled very nicely
with significantly cheaper alternatives. Helping the, ya know, team. We're able to do what we want to do --- keep guys in front of us and nail the tackle to keep the YAC down. I don't know what PFF says on the topic, but I think both the backfield coordination and tackling has been really solid. Surprisingly so.

Remember how Jon Jones was strictly a slot corner? Incorrect.

Jack Jones has been damn good all season. He could not have arrived at a more opportune time or a better situation for him. He was the guy that was also a bit small to play boundary corner and
had some dreaded off-field issues, proving, once again, that the stuff said about pro prospects in early April often proves to be complete bullshit. We're near the halfway point in the season and I can't think of the last time we had a rookie Corner better than 13. McCourty was an excellent Corner as a rook, but that was a long time ago.

The 3 areas of this team that, for me, have been consistently solid are them, the running backs and Nick Folk.

Peppers skirted with the line several times in the Jets game; he could have been called for another penalty as well when he upended a Jet receiver in the tackle. But I liked that about him, the defense has an aggressive edge about them, and I'd like to see them even nastier. But no silly penalties if possible.

I remember seeing this during the game, It is actually illegal isn’t it??

Roberto71 said:
I remember seeing this during the game, It is actually illegal isn’t it??

Nope - totally legal and always has been. If I remember correctly, the saying is having longer hair is a choice so if you choose to have long hair and it gets pulled, so be it.

Mac was better than he looked vs the Jets. 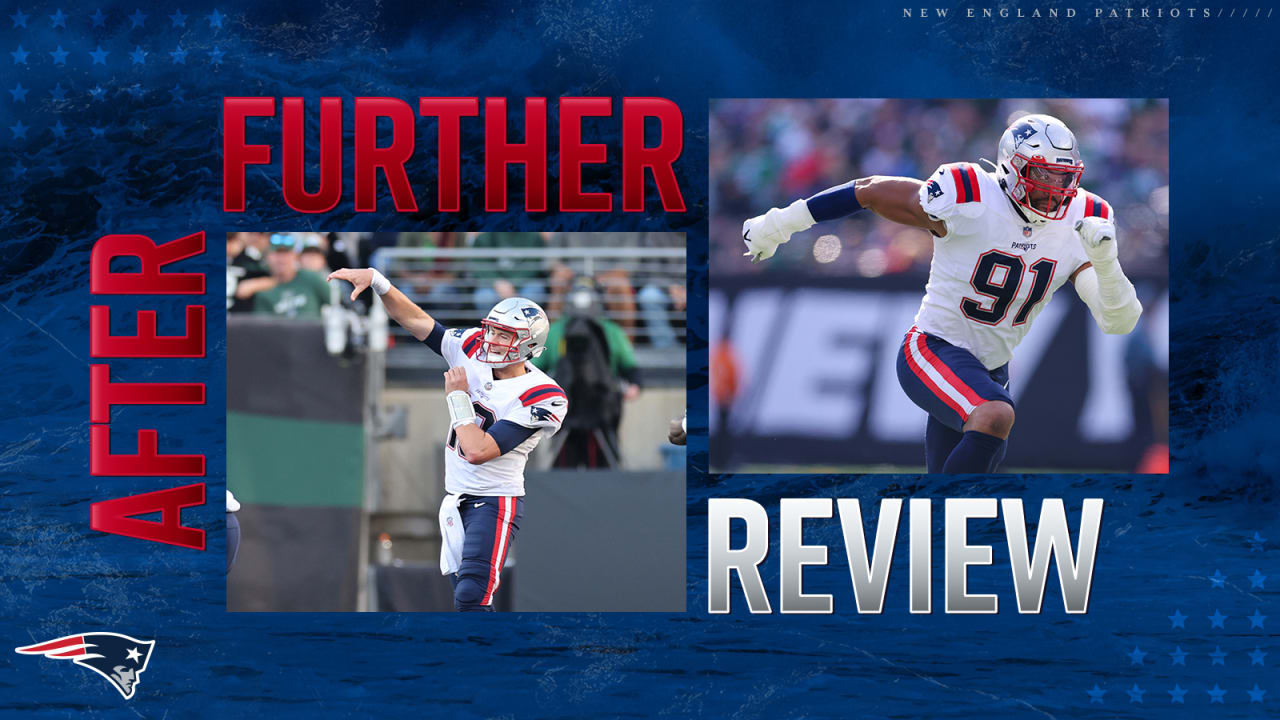 The Patriots earned a much-needed win over the Jets on Sunday. 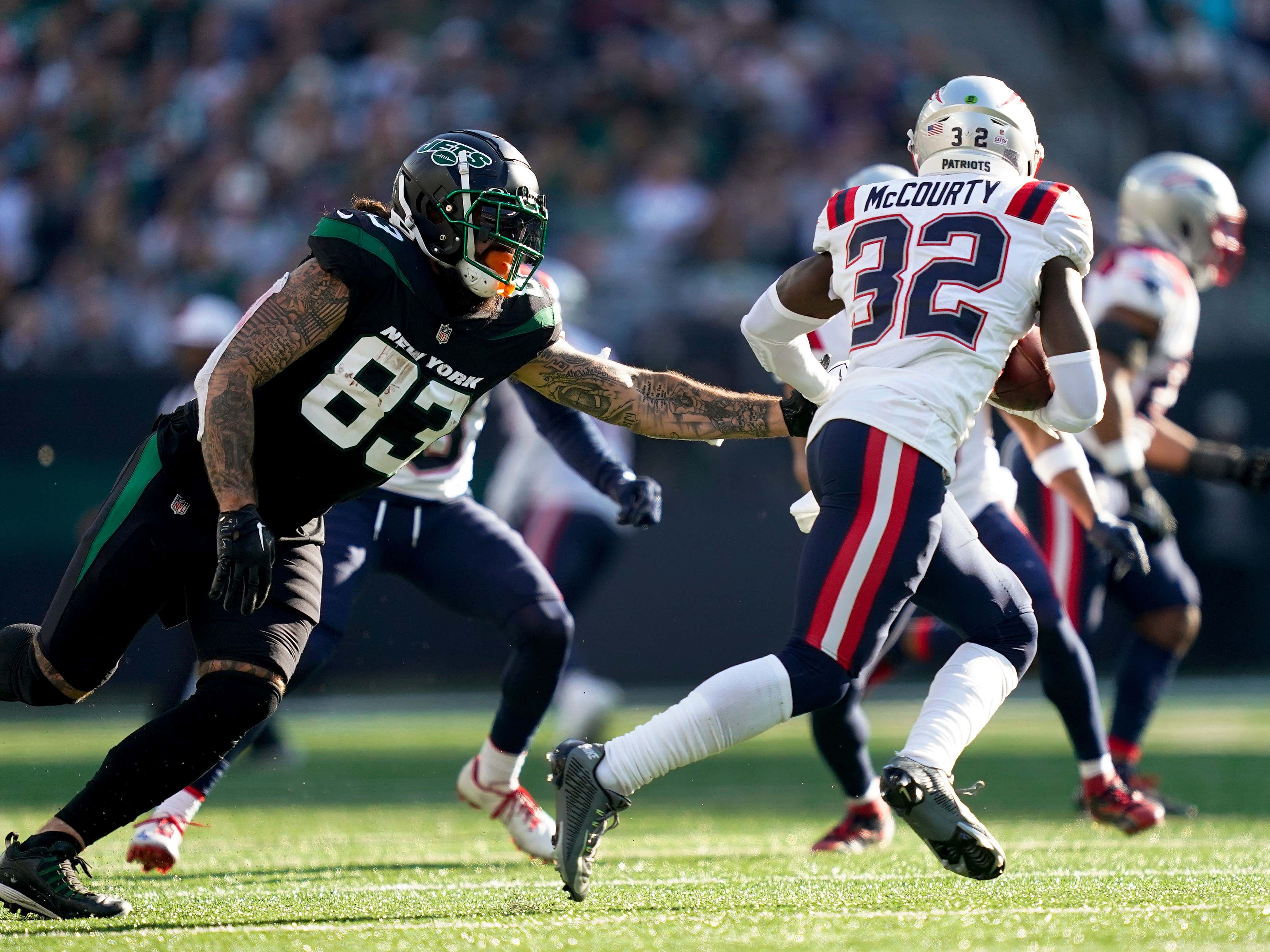 Things to consider while suggesting a costume that will scare your Jets fans neighbors and intrigue your mom's girlfriends:--I'm not going to claim this one was a masterpiece. I'm not saying it belong...


As soon as Rhamondre took the field if was clear to me he is far more versatile than Lagarrete. The kid can block, catch, be elusive, power it out and just flat out has great vision and athleticism.

I remember this whiskey drunk angry garden gnome redneck I was living with talking ragtime shit about the kid screaming this kid is worthless, give Harris all of his touches.

This is same guy who screamed all season that Judon is worthless after I began pumping up the signing in training camp.

Harris is great in his own right, Rhamodre is the complete package.
Last edited: Nov 10, 2022

Rhamondre reminds me of someone different than most.

RBx is Marshall Faulk. That sounds weird, but Mondre ran a 4.67 vs Faulk's sub 4.4. Imagine Mondre's strength and weakness profile if he was 2 inches shorter with that lowered center of gravity, 15 lbs lighter, and ran a 4.38. It's that style, as transferred to the size/speed combo.
Show hidden low quality content
You must log in or register to reply here.
Share:
Facebook Twitter Reddit Pinterest Tumblr WhatsApp Email Share Link
Top