Belichick on wanting to keep Brady

Mazz22 said:
Seth says Kraft called Bill an Ahole and an idiot savant. If I am Kraft, I am on twitter now denying that.
Click to expand...

"Ah! You see your honour? She hasn't denied it! That's all the proof we need!"

Roberto71 said:
Why would he bother?!!

"Ah! You see your honour? She hasn't denied it! That's all the proof we need!"
Click to expand...

Because it is easily the most damning quote ever by Kraft toward Bill.
P

Mazz22 said:
Because it is easily the most damning quote ever by Kraft toward Bill.
Click to expand...

No, it actually isn't.

Phil Elliott said:
No, it actually isn't.
Click to expand...

He did call him a schmuck over spygate, true. But calling him the biggest Ahole in his life and an idiot savant is blistering.

Mazz22 said:
He did call him a schmuck over spygate, true. But calling him the biggest Ahole in his life and an idiot savant is blistering.
Click to expand...

How do we know this? It's highly likely each story is a fabrication or just shock and awe "journalism" at its finest. This is media thing where they gain your trust by sharing something truthful and then they turn around and sneak in a piece of speculation from that same person, hoping you believe all of the information. If you pay attention, you can catch this stuff. I've caught numerous people in lies through the years just by paying attention. I suggest you try that instead of believing everything served up to on your computer screen. Just because something is in print, doesn't make it the truth. Even if Kraft thought BB shouldn't have flipped off Manboobs to draw attention to Goodell's cheating, it's not really the story. The bigger story is Goodell's lying and cheating and yet the media doesn't want to write a book about it. I know why. Do you?

How many more times does Goodell need to go into a court and be caught lying. Does this happen to other commissioners? Hmm. If so, why not? Why is it just him this happens to?

Like, if Goodell lies about the St. Louis move in a federal court again (the 4th time), is that enough for the media to decide write a book about the inner workings of 345 Park Ave, breaking the law and being corrupt?

I could care less about what's said in meetings in Foxborough. I care more about the truth.

Mazz22 said:
You guys are so duplicitous it is delicious. You know if this book was dropping bombs on Brady, there would be 5 threads on it! LOL
Click to expand...

I don't need a book to know Primadonna Brady was a bear to deal with and keep happy with Giselle in tow.

Mazz22 said:
Please. Seth published a very in-depth article back in 2018 that has proven to be largely true. There are huge bombs in this book if Bill or Kraft do not directly deny the quotes directly attributed to them then I am sorry, we can definitely take it as true.
Click to expand...

Umm, no they weren't proven to be true because there were no primary sources nor were the myths corroborated. It's because much of the material is sensationalized to be able to sell. Seriously, how old are you? Did you college yet?
OP
OP

Mazz22 said:
He did call him a schmuck over spygate, true. But calling him the biggest Ahole in his life and an idiot savant is blistering.
Click to expand...


Of course it's not "blistering", and of course your narrative is wrong because you did not take the time to acquaint yourself with facts/evidence, and have an obvious agenda.

This was the context of Kraft's comments - he was referring to Belichick before he had been hired in New England.

"Bill was an idiot savant," Kraft told a confidant, according to the book, alluding to Belichick's reputation before he hired the former Cleveland Browns coach in 2000. "I gave him this opportunity."
Click to expand...


You know what else is in that book? Apparently the fact that Kraft and Brady discussed successors to Belichick, and they speculated that should McDaniels leave, they could get Bill fucking O'Brien from the Texans. The book suggests that O'Brien intentionally tried to get himself fired in Houston because he believed he might have the opportunity to become the head coach in New England - does that sound legitimate and make sense to you?

There may be context I'm missing here (perhaps this discussion was contextualized with Bill voluntarily leaving rather than being fired), but I think we've gotta take the stuff in this book with a big grain of salt. 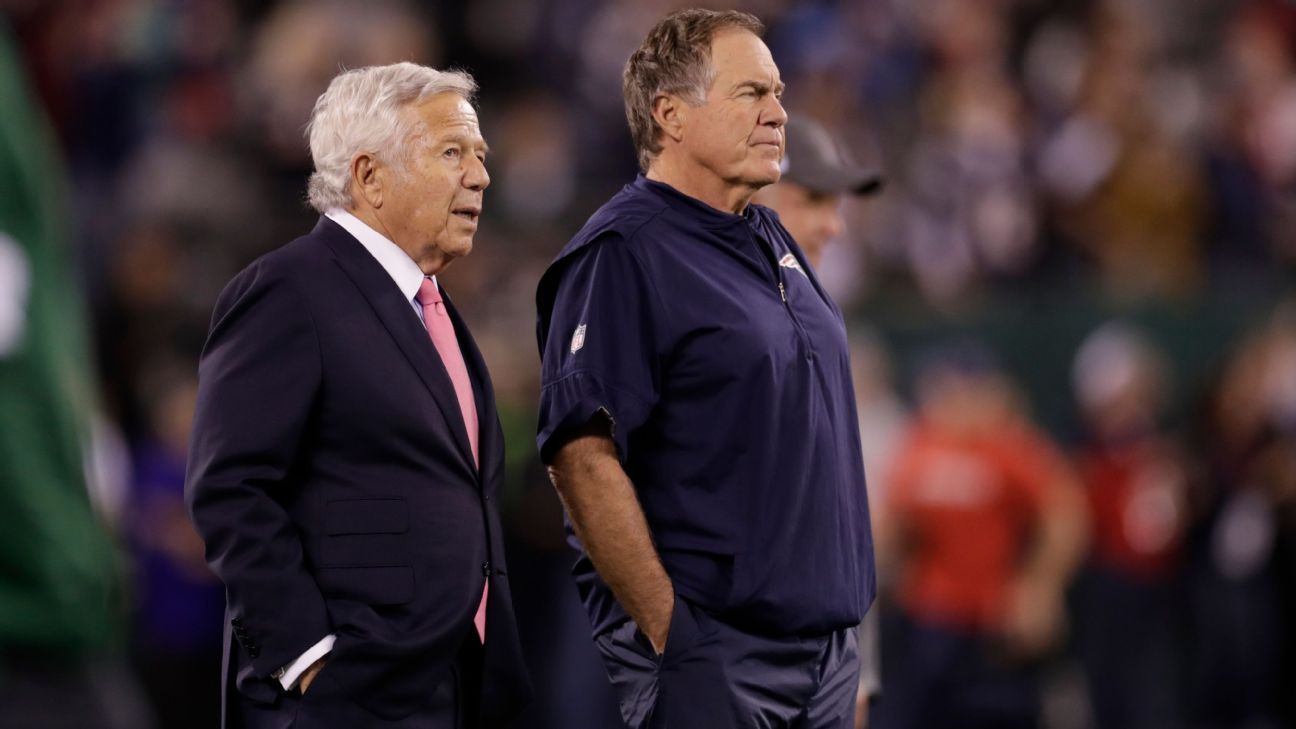 A new book goes inside the secretive and controversial New England Patriots franchise that dominated the NFL from 2001 to 2019 and illuminates the power dynamics between the driven, proud trio of Robert Kraft, Bill Belichick and Tom Brady.

vertigho said:
But I think we've gotta take the stuff in this book with a big grain of salt.
Click to expand...

I agree. These are also only excerpts which lacks full context. I need to read the book. I think it comes out Oct. 12.
P

So, is Tompa Boy lying about the post-prom breakup or is Wickersham lying about it? Tompa says everything about his exit was handled "perfectly"

at first i thought the wickersham stuff was pure b.s.(when it started years ago). but now after hearing tb's dad and guerrero, i feel like wickersham stuff has been somewhat fueled by leaks on tb's side of things all along. so...some b.s. that's b.s., some hurt feelings stuff, exaggerations, etc.

HSanders said:
at first i thought the wickersham stuff was pure b.s.(when it started years ago). but now after hearing tb's dad and guerrero, i feel like wickersham stuff has been somewhat fueled by leaks on tb's side of things all along. so...some b.s. that's b.s., some hurt feelings stuff, exaggerations, etc.
Click to expand...

Well after hearing Wickersham on Rich Eisen yesterday who actually believed that if the Patriots put out a tribute video to Tom in Gillette right before the game, it will be Bill trying to play mind games with Tom.....When Eisen laughed at that idea, Wickersham pleaded, "Don't you know those people?"

Wickersham is a prick. The book is a sham because it is essentially about three people and not one of them have gone on the record, none have confirmed any of the accounts in the book, nothing. There are NO direct sources from any of them. Therefore it's pure fiction.

Imagine having a book claiming to be biographical, a book about an actual historical event and having ZERO direct, attributed accounts from the protagonists? Zero? The author would be laughed out of it.
Last edited: Oct 1, 2021
OP
OP

Mazz22 said:
Sounds like a bit of revisionist history there from Bill. If they wanted him, there were several occasions where they could have signed him going back to 2017 after the traded Jimmy. They didn’t.

Overall though, I thought Bill's answers were really good and set a good tone for the week. I just hope Brady's dad does not pop off again. LOL
Click to expand...

Or Alex Guarrero, Bill hasn't evolved as a coach. lol