A college student walks up to a farmer asks:​

"Excuse me Sir, I couldn't help but notice that on the far north end of you property, I saw some cottonwood trees.

Would it be okay if I go and harvest me a few bags?"

The farmer scratches his head and says "Everybody knows you can't get cotton from a cottonwood tree."

The farmer allows him to go and a few hours later the student comes back with two overstuffed bags.

The farmer is amazed.

A few weeks later, the same college student comes up the drive and says "Excuse me sir, but on the west end of your property, I saw some honeysuckle, and I was wondering if it would be okay to get a few jars of honey?"

The farmer says "Come on, Son. Everyone knows you can't get jars of honey from honeysuckle. But go ahead."

A few hours later, the student returns with two big jars of honey.

A few weeks later the student returns a third time.

"Excuse me, Sir? I couldn't help but notice that on the far south end of your property, you have some pussywillow."

BostonTim said:
While I was teaching, we used an alternative approach. We cut the Pie at 1:59 PM.

Nice. Plus you can use this every year.

As a practical joke I arranged a bucket of liquid nitrogen so that it fell on our chemistry teacher when he opened the door.​


He must have found it funny. He completely cracked up!

Boomers: When life hands you lemons, you make lemonade.

Millennials: lol, as if anyone would just "hand me" some lemons.

Little Johnny was in bible study one morning. Sally was sleeping in front of johnny.

The teacher asks Sally who our Lord and savior was. Little Johnny pokes her in the ass with a pin and she yells "Jesus Christ!" And falls back to sleep.

A little while later the teacher asks Sally who created our world. Johnny poked her in the ass again with a pin and she screams "my god!" And falls back to sleep.

Later the teacher asks Sally what Eve said to Adam after they had their fourth child. Johnny pokes her in the ass with the pin again and Sally screams "if you stick that thing in me one more time I'm gonna break it!" The teacher faints.

A boy was with his dad when he saw a butterfly and killed it, the dad said that the boy could not have any butter for the next week.. a few weeks later the boy killed a honey bee the dad said: no honey for a week! shortly after the boys mother killed a cockroach, the boy turned to his dad and said: " are you going to tell her, or shall I?

BostonTim said:
While I was teaching, we used an alternative approach. We cut the Pie at 1:59 PM.

did i ever post my PI, Patriots style graphic? 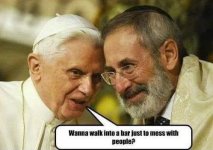 There's a lot of truth in this image...

Two sex workers were on a street corner. They started discussing business and one of the sex workers said, “Yep, it’s gonna be a good night, I smell cock in the air.” The other sex worker looked at her and said, “No, no. I just burped.”

Study finds that the most popular fetish among Millennial is...​

Role playing as a couple that owns a house.

A priest, a rabbi, and a minister walk into a bar. Bartender looks up and says, "What is this, a fucking joke?

Wife was sitting on the sofa with her husband while sipping on a glass of wine. "I love you" she said.

Is that you or the wine talking? laughed the husband.

It's me darling, but I'm talking to the wine.

A hunter kills a deer and brings it home for dinner.​

His family sits down to eat and he knows both of his kids are picky eaters so he doesn’t tell them what it is. As they eat the kids keep asking what it is they’re eating. Finally the dad says “it’s what your mother sometimes calls me” The first kid looks up at the other as yells “spit it out it’s asshole”

A couple days later, his daughter walks in and she says:

"Dad, i went to the toilet and peed shotgun pellets. What's wrong?"

"Ah shoot!" exlaims the dad "i just remembered I forgot to clean them out of the carcass. Call the rest of the family, we should go to the doctor. I'll get the car"

Then the son walks in white as a sheet

"I know son, relax. You peed pellets too?"

"No dad, I was wanking behind the shed, and then I somehow shot grandpa dead"

Dave is a well known, respected hunter, known to be the best in the state.​

One night, he is sitting in a bar with some friends, and an out of state hunter stops in the bar.
He overhears Dave’s friends talking about how he’s the best and says, “there is no way he is the best hunter in the state!”

So Dave bets him that he can not look and guess what an animal was an how it died by its fur. For every one he gets right, the hunter will buy him a beer.

Thinking he can’t possibly do this, the hunter agrees. He gives Dave a skin, and after a pause, he says “black bear, killed by a .308 rifle.” He was right, and got a beer.
Another bar patron went and got a pelt from his car trunk and gives it to Dave. After a few minutes of feeling the fur, Dave says “Elk, killed by a 7mm rifle.”
He was right again, and swigged another pint.

This went on long through the night, with the hunter and other patrons bringing Dave pelts and furs, giving him beer after beer, until he stumbled home drunk of his ass. He woke up the next morning with one hell of a shiner, and asked his wife “I know I was drunk last night, but not drunk enough to get in a fight and not remember it! What happened?”

“Because last night when you came home, you came into bed next to me, put your hand down my panties and loudly declared ‘skunk! Killed by an axe!’”

A Priest and a Rabbi are walking down the street when they see a young boy playing in his yard
the Priest says to the Rabbi "do you wanna fvck him"?
and the Rabbi says "Out of what?"

(excuse me while I just let myself into hell

Patriots44 said:
A Priest and a Rabbi are walking down the street when they see a young boy playing in his yard
the Priest says to the Rabbi "do you wanna fvck him"?
and the Rabbi says "Out of what?"

(excuse me while I just let myself into hell