PatsFanDan said:
You have to wonder if the Rangers had not been mathematically eliminated from playoff contention along with the combination of losing Panarin for the rest of the season, would the decision to not suspend possibly been different? And it shouldn't matter in my mind as I actually believe he should have been suspended regardless.

The Rangers are calling for George Parros' head. They want him removed as the head of NHL player safety.

Parros was a Manchester Monarch back when I had season tickets nearly 20 years ago. He was a pretty tough cat in his day.

Maybe it would be better if the head of player safety wasn't a guy who had been an enforcer back in the day. I mean how many times have we seen these guys pat each other on the back and congratulate the other guy after trying to knock his head into next Tuesday? But WTF do I know. I never played organized hockey and haven't been in a fist fight since the 4th grade.
Click to expand...

I have played organized hockey since I was I kid (and will play with MY kids this summer). That ice is harder than you think. His head was whipped into it.

Parros must be fired.

How will the NHL survive the lawsuit after letting him off again when he kills or permanently injures someone?

It's really disgraceful what Wilson did. It's just out and out thuggery. There is zero excuses for it, he needs to be banned for a long time. Fans love the toughness of Hockey, but this isn't Hockey.

PatsFan09 said:
I honestly hope that the Rangers unleash Hell on Wilson tomorrow. Guy needs to be removed from the game.

That would be good but it won't happen, that game will be under a microscope by the league's DOPS. Wilson should be kicked out of the league and never allowed to play organized hockey again, he is a detriment to the sport.

Wilson only was fined for his actions Monday night​

Safe to say the New York Rangers are not happy with the NHL and its Department of Player Safety for their handling of Tom Wilson.
We’re sure you know by now, but the Washington Capitals forward only was fined $5,000 for punching Pavel Buchnevich while he was defenseless on the ice during Monday’s game against the New York Rangers. Wilson later pulled Artemi Panarin to the ground by his hair, which resulted in an injury that will keep the Rangers star forward out for the remainder of the season.
The move garnered reaction from former NHL enforcer John Scott, as well as outrage from Rangers head coach David Quinn and forward Mika Zibanejad.
Well, the Rangers took it one step forward and released a statement Tuesdayexpressing their disgust with the NHL for not suspending Wilson for his “act of violence.”

Read it in full below:
The New York Rangers are extremely disappointed that Capitals forward Tom Wilson was not suspended his horrific act of violence last night at Madison Square Garden. Wilson is a repeat offender with a long history of these types of acts and we find it shocking that the NHL and their Department of Player Safety failed to take the appropriate action and suspend him indefinitely. Wilson’s dangerous and reckless actions caused an injury to Artemi Panarin that will prevent him from playing again this season. We view this as a dereliction of duty by NHL head of player safety, George Parros, and believe he is unfit to continue in his current role.


It certainly is asinine that Wilson, a repeat offender and reckless player who was suspended as early as March for concussing Boston Bruins defenseman Brandon Carlo, only was slapped with a fine. He’ll never change his ways when all he continues to get is a slap on the wrist for intentionally hurting players.
The Rangers won’t be making the playoffs, but Wilson still will be able to play the remainder of the season, and however far the Capitals get into the postseason (assuming he doesn’t get into trouble again, but that’s a bold ask,) while Panarin recovers from an injury he shouldn’t have in the first place.
The two teams once again Wednesday night, and we’re sure the blood will be boiling.
P

For what it's worth, WEEI also has a story where a Ranger's reporter has said that Parros didn't want to suspend Wilson after the Brandon Carlo hit earlier this season. Allegedly the suspension was only handed out after commissioner Bettman overruled Parros and hence the 7 game suspension was given.

All of this is painting Parros in a very bad light. He is heading up the department that is supposed to be taking actions to protect players in a world where the NHL, like the NFL, has now been the target of much criticism for its ignorance towards head injuries thru the years.

I read the Rangers are thinking of brining in some monster from their Hartford Wolfpack affiliate for the game. This could get very ugly. The Rangers admitted they just don't have the players to take on a Wilson, they don't have that classic enforcer.

It KILLS me that Chara has to call that P.O.S. a teammate and stand up for him.


But the Rangers can get off their high horse. They employed Sean Avery for how long????

Been keeping attention to the Pens rise to the top of the division.

Also been keeping an eye out on your team.

Ideally, I hope your team and the caps meet 1st rd. and you beat the shit out of each other.

AnOldTroll said:
Been keeping attention to the Pens rise to the top of the division.

Also been keeping an eye out on your team.

Ideally, I hope your team and the caps meet 1st rd. and you beat the shit out of each other.
Click to expand...

You have 1 game left, we have 3 and we have you in our sites.

AkPatsFan said:
You have 1 game left, we have 3 and we have you in our sites.

You can win out now B's.
Thanks. 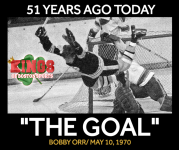 Playoffs starts on Saturday in Washington, after watching the Caps play the baby B's last night and barely winning (with 1.8 seconds left) on a fluky deflection, I like their odds of winning this series.

Listening to the playoff announcer whine and bitch and complain about what just happened in front of the net with Smith begging for the league to add additional punishment is such bullshit.

He is a fucking capital homer.

Bruins can’t friggin’ finish, and way too many soft turnovers.

Wow, some win in OT!

A moment that has aged magnificently. More beautiful every year.

When it happened. I wonder if BFO ever thought that someday soon he'd be looking back on it through a fifty-one year old lens.

I don't think the Bruins played particularly well in Washington, but come away 1-1.